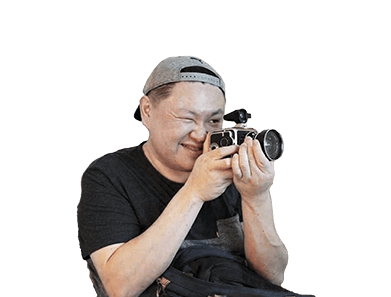 In 1998, Starbucks entered Taiwan and led the trend of starting a home baking business. Lin Wei-Ting is now 38 years, and he was also one of the many people to follow the trend.

Originally, he was heavily addicted to coffee. But then, owing to his precise business acumen rather than romantic thinking, he finally started his business.

To accurately control your desired flavor, you need to precisely manage the preservation, baking and brewing of coffee beans.

From the moisture density of ice cubes to the details of desserts with coffee, everything must be attentively taken care of.

The ultimate goal is to bring out a smile on the customer’s face upon one sip of the coffee.

Lin Wei-Ting: "How the self-roasted coffee tastes lies in how the person who baked the beans present the personality of the coffee beans."

Lin Wei-Ting grew up in a tea garden. He is now the boss of his own business. And he used to like tea more than coffee.

At that time, he had an impression that coffee was black and bitter. But somehow, by accident, after he drank the coffee brewed from the coffee beans baked by his friend, he changed his view on coffee and began to study the mystery of coffee.

Owing to his love for the design work, he gave up many things in his life, until an accident made him unable to hold the pen and take the mouse.

He could not help but wonder: "What else can I do if I do the design work?"

Therefore, when he was in his early 20s, he started to brew coffee and bake beans. His friends even told him jokingly: "You should either grow coffee trees or open a coffee shop."

In the 2 years of preparation for the venture, he used a small oven to bake beans and rehabilitate his wrists. At the same time, he looked for a location to open the store, and he finally settled in the business circle around the MRT Formosa Boulevard Station in Kaohsiung.

Lin Wei-Ting majored in design when he was in college, and he worked with his friends on the design work for the store, which is now located in front of the exit of the MRT Formosa Boulevard Station in Kaohsiung. The store successfully created a quiet corner out of the boisterous city by filling itself up with jazz and classical music.

Lin Wei-Ting used lovely illustrations to arrange the menu and paint the walls. He also used an easy-to-understand way to describe that: "Drinking coffee is like taking a shower. At the beginning, you can try the temperature with a small sip. Then, you can take a mouthful, and finally you can suck it like a shower."

Also, as he emphasized on the fresh seasonal coffee beans, he tried a variety of baking techniques. When he thought that the coffee beans were under-cooked, he would donate them to the nearby century-old temple for the public to brew coffee on their own.

"I would teach them how to brew coffee, and they would begin to drink coffee. After a while, they became addicted. And so, he began to sell the coffee beans to the temple." He laughed, saying that it was a precious experience in his life.

The single-origin coffee beans in COFFEELING are mainly imported from the world-famous farmlands.

In particular, some of the champion beans that are hard to get anywhere else may be accessed here.

In addition, he also introduces coffee beans of different flavors every day according to the season, and emphasizes the importance of fresh baking to bring out the best flavor. Therefore, he also holds coffee parties from time to time for coffee reviews.

Among the coffee flavors that he is proud of, 4 formulas scored high scores between 90 and 94 in the 2012 "Coffee Review."

"When you try to bring out the best flavor and stick to it, customers will visit and re-visit your shop continuously."